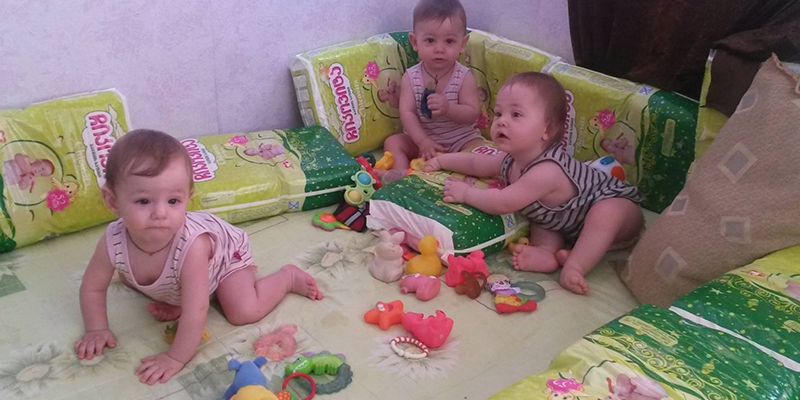 The Charitable Fund of “Aversi” Supports the Mother of Three Twins

Last year on the 20th of October Mrs. Lia Tsindeliani gave birth to three twins – Giorgi, Nikoloz and Gabrieli. The children are already 1 year old and during this period of time the Charitable Fund of “Aversi” has been supporting the mother of three twins with care and hygiene products. In December she received another present from the fund: pampers, shampoos, wet wipes and an entire set of care and hygiene products for children. _”I have always respected Mr. Paata Kurtanidze, as a father of six children. I have also known him as a benefactor and Maecenas. After my children were born, I applied to many organizations. However, I haven’t received any support; instead I was told that I was not a vulnerable person and, consequently, did not deserve any support. In the end we applied to the Charitable Fund of “Aversi”, as Mr.Paata is properly aware of the problems faced by large families. I am sure you will agree that nowadays for being brought up properly; even one child requires great effort and certain financial resources. What can be said when you have three children? It doesn’t matter how wealthy a family is, it will still face significant expenses in bringing up children. Since the day I applied to the fund, my children

have had no shortage in pampers or any other care products. If not “Aversi”, I would probably have no other way, as to move abroad. But I want my children to be raised as Georgians. In our neighboring countries, like Turkey, Armenia and Russia large families and mothers, having twins, are offered certain social guarantees. Besides, they are offered particular either disposable, or monthly support packages. In the European countries the situation is even rather better. Despite the fact that three boys are brought up in my family, no one mentions anything about the provision of any kind of assistance to us.
Georgians are included in the list of dying races and I consider the creation of corresponding social conditions for large families must be the main priority for any government
For the companies and organizations engaged in charity there must be established particular encouraging policy and not sanctions.
I have visited the Charitable Fund of “Aversi” many times and I have seen with my own eyes how many people receive support there. I wish for anything good Mr. Paata gives or shares, to get a hundredfold return, as exactly such persons contribute to the well-being and bright future of our country. “