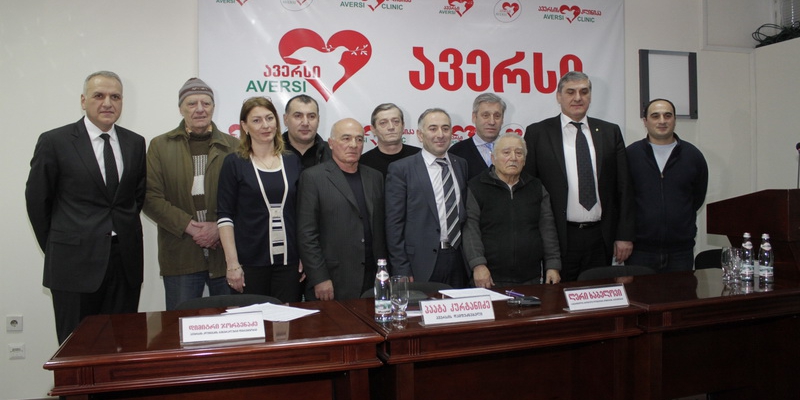 The founder of “Aversi” Mr. Paata Kurtanidze is a big fan of sport and significantly contributes to the development of sport in our country. Upon his initiative, for already six years there has been functioning the project according to which as active, as retired sportsmen have the opportunity to receive any type of medical treatment at “Aversi Clinic” and acquire any medicines prescribed by doctors entirely for free. On the 19th of February 2009 the first memorandum was signed and since that time it has been extended annually for the period of one year.
Consequently, this year the memorandum has been extended. The briefing was attended by: the president of the Olympic Committee Mr. Leri Khabelov, vice-presidents, the founder of “Aversi” Mr. Paata Kurtanidze, the general director of the network of “Aversi Clinic” Mr. Dimitri Jorbenadze, the director of the Charitable Fund of “Aversi” Mrs. Ketevan Nemsadze and famous sportsmen- Olympic champions and medalists.
Up to now within the framework of the project 650929.9 GEL has been allocated on the provision of medical service and 253684.08 GEL- on the medicines. As Mr. Paata Kurtanidze said, the aim of this agreement is to foster sport development in Georgia, stimulate upbringing of healthy generation and promote sport in our country.
-“With the help of God we are able to contribute to the development of sport. The tradition that began in 2009, continues. It is a pleasure for us to express our respect and gratitude to the people who during several decades have been working hard for the fame of Georgia. We wish great success to the Georgian sportsmen!”
On the occasion of the 25th anniversary of the Olympic Committee Mr. Paata was awarded a special certificate and a medal for significant contribution to the development of sport. The president of the Olympic committee Mr. Leri Khabelov pointed out that the memorandum signed between the Olympic committee and the Chitable Fund of “Aversi” is really a very successful project.
-“We have been cooperating with “Aversi” for already six years. Our sportsmen need regular medical service and diagnostic research procedures for being in a good form. With the support from Mr.Paata our sportsmen are able to receive any type of medical treatment and other procedures. It is really great that we have such a faithful fan. I’d like to thank Mr. Paata for his support. We will try to do our best at the next competitions.”-said Mr.Leri Khabelov.
The general director of “Aversi Clinic” Mr. Dimitri Jorbenadze pointed out that it is a big honor and responsibility for him to take part in the memorandum established between “Aversi” and the Olympic Committee:
-“It is impossible to reach success in sport without the opportunity of proper medical service. In this case, the role of rehabilitation service is very important. It is a great honor for us to support our sportsmen’s health and contribute to their success.”
We also talked to the director of the Charitable Fund of “Aversi” Mrs. Ketevan Nemsadze.
-“ Georgian culture is famous all over the world; however, besides this fact, our country is very popular in the sphere of sport. It is an amazing result. Very often victory is unfortunately followed by various injuries. The provision of medical service is in direct proportion with their success. This memorandum represents a good incentive for our sportsmen. It is really a national project serving the interests of our homeland. This is a genius project that has become a tradition and caring about our sportsmen has become one of the main priorities of “Aversi”.
The vice-president of the National Olympic Committee Mrs. Nino Salukvadze pointed out that nowadays there is no rehabilitation centre for sportsmen and during many years only “Aversi” has been caring about their health:
-“Sportsmen very often have specific injuries and high-qualified specialists service is therefore very important for them. During many years “Aversi” has been supporting not only active, but retired sportsmen as well. I’d like therefore to thank the founder of “Aversi”.”
Gela Ketashvili, a football player and an Olympic champion, having got injured many years ago, now suffers from a chronic disease and uses “Aversi Clinic” service:
-“The word “satisfied” won’t be enough to describe my attitude towards this project. I am admired by Mr. Paata and his devotion to the Homeland. I have known him for many years and may say he is a real patriot who appreciates our sportsmen’s hard work. I’d like to thank “Aversi Clinic’ specialists. They are real professionals.”
“Aversi” wishes our sportsmen success, victory, health and peace of mind!