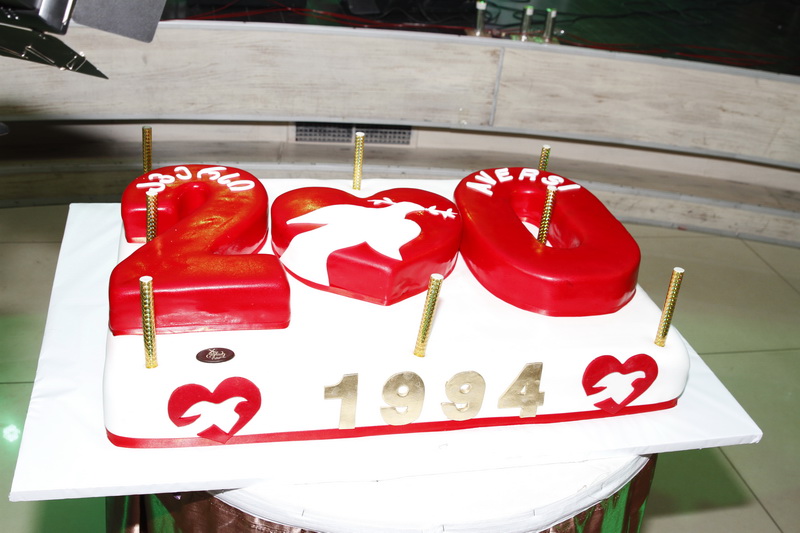 On the 14th of November “Aversi” celebrated its 20th anniversary at the restaurant “Monopoli”. The event was held in traditional atmosphere – smiling faces, delicious dishes, impressive apparel, firework and the best wishes to “Aversi”.

As it was expected, the celebration was impressive, glamorous and memorable.

The employees of “Aversi” were extremely happy to celebrate the 20th anniversary of the company and also to recognize the fact that they are a part of its history. Indeed, all of them have greatly contributed to its success; for any of them “Aversi” has become not only the place for work, but the second family- friendly and cohesive team.

With regard to the society, all this time “Aversi” remains the symbol of stability, kindness, justice and power.

The employees of “Aversi” on the occasion of the anniversary prepared a special film- they were given the opportunity to congratulate the company and tell the guests what “Aversi” means for them. The Head of the PR Department, Mrs. Lali Bregvadze, acted as a journalist for one day and together with the operator she visited all the employees of the company’s head office.

This film and also 20,15, 10 year-old recordings and extracts from TV broadcast about the company were met with a standing ovation. No less impressive was the creative performance implemented by Nona Giunashvili-the history of “Aversi” shown with the sand- and the firework that ended this great event.

Twenty years is not a big period of time; however, it’s only the beginning of the way that has already brought the company to society’s recognition and which was full of various obstructions. Nowadays, all the barriers are overcome and great plans and projects are ahead.

The founder of “Aversi” Mr. Paata Kurtanidze greeted the guests of the evening:

-“At the very beginning I didn’t think about such achievements. Being a student, I have always wanted to become a successful doctor. I love children and that’s why I entered the Pediatric faculty at Tbilisi State Medical University.  I imagined myself only as a doctor but life made me to change my mind: after the dissolution of the USSR economic crisis began that in return caused the shortage of medicines. Patients at that time had to bring with them not only medicines, but petrol as well, in case if there was no electric power. On the basis of this fact, I had the idea of supplying medicines and later I founded my company. At that time I   couldn’t imagine that after 20 years about eight thousand people would work at “Aversi”. Following my experience, I may state that business is successful if it corresponds to several criteria. The most important is to be oriented on the process of supplying needed product and service to the customers in the best way.

I’d like to thank each “Aversi” employee, for whom “Aversi” has become the second family and also my family members who always supported me. Wish you longevity, health and peace of mind.”

The co-founder of the company Mr. Nikoloz Kurtanidze also congratulated everyone on the anniversary of “Aversi”.

One more impressive event took place at the evening- the first employees of “Aversi” received a solid money award from the founder of the company for faithfulness and special merit.

The new anthem of “Aversi” written by Rusa Morchiladze was performed by the employees themselves, who once more proved the fact of being extremely talented.  At the evening they continued the performance of professional dancers and showed excellent choreographic ability.

The event was also attended by the friends of “Aversi”: Nodiko Tatishvili, the ensembles “Bagrati” and “Abjari”, band “Gufy Land” and etc.

This impressive evening will become one of the unforgettable events in the history of “Aversi” and you should remember that “Aversi” was, is and will always be at your health’s service.