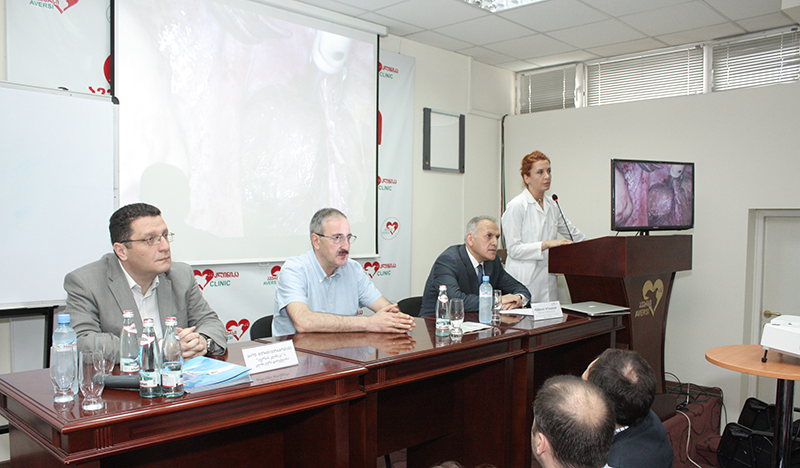 The Regional Seminar on Gynecologic Laparoscopy at “Aversi Clinic”

The chairman of the seminar Mr. Revaz Botchorishvili, who is a director of the international laparoscopic centre “Clermont-Ferrand”, has been living in France for already 21 years. Mr. Revaz organizes numerous training seminars in different countries, where the attendees are presented certain innovations and achievements in the sphere of gynecologist laparoscopy. Mr. Revaz considers his every visit to Georgia to be of great importance:

-“One of the basic directions of my activity is training and experience sharing. I frequently travel to different countries, as well as Georgia, and implement certain surgeries. However, the seminar of such a high level has been held here for the first time. I want to thank the authorities of “Aversi Clinic” and I also want to point out that the surgeries have been definitely carried out at the highest level thanks to well-equipped operating rooms and excellent conditions presented at “Aversi Clinic”.

Another chairman of the seminar was the professor of the Ott Research Institute, Mr. Vitaliy Berejin. From his point of view, the seminar is of great importance for two reasons:

-“First of all, the seminar was attended by the representatives from different countries; the meeting was well-organized and I am sure that the information gained at this seminar will be very useful for their professional activity. From the other side, the seminar will be regularly repeated and with the support from the companies-organizers will be held annually. I hope that it will be an interesting and productive course for all participants.”

More than 100 doctors wished to attend the conference. Gynecologists from all over Georgia, Azerbaijan, southern regions of Russia, Armenia and Kazakhstan took part in the seminar.

The general director of “Aversi Clinic”, Mr. Dimitri Jorbenadze, pointed out that the sphere of medicine in Georgia is highly developed. This is the very reason why “Storz” chose Georgia for holding the seminar. Besides, “Aversi Clinic” is equipped with high-quality machinery that in turn gives us the possibility to hold the seminar in compliance with international standards.

-“This conference is significantly wide scale and productive. The aim of the seminar is as theoretic, as well as practical training- the participants are watching unique surgeries via online regime; listen to the commentaries made by the surgeon, who in turn explains to the audience what is being implemented and why. This procedure represents the modern approach to gynecologic laparoscopy. I must point out the importance of the role performed by Mr. Revaz Botchorishvili in the organization of the seminar, as well as the development of gynecologic laparoscopy. Besides, no less important is the fact that the specialist of such a high rank shares his knowledge and experience with the specialists from Georgia and other countries.”

The gynecologist, Marika Japaridze, pointed out that for the three-day seminar there have been chosen up to ten patients with different diagnosis, requiring urgent operation:

-“We are the witnesses of the most complicated and unique laparoscopic manipulations. Among them, there have been held such an operation, as the limfodissection in the pelvis during uterus cancer. The seminar will acquire a systematic character. Last November there was held an interesting seminar on hysteroscopy. In the nearest future no less wide scale seminar will be devoted to this topic.”

The seminar was mainly oriented on the Caucasus region, however, the representatives from other countries were present as well. Eight doctors arrived from Kazakhstan. As the guests pointed out, despite the fact that no less wide scale master classes have been held in their countries for a long time, the training has significantly developed their level of knowledge. Georgia is expected to achieve more than that.

We also talked to the Assoc. Prof. of Medical Sciences of Azerbaijan, gynecologist, Mr. Islam Magalov:

-“This is the case, when pleasant is combined with useful. Tbilisi is a very beautiful city; I am full of positive emotions. Besides, from professional point of view, we were given one more opportunity for self development. We often go to Europe and attend similar events. I must point out that the base of “Aversi Clinic” more than complies with the European standards. The seminar is really well-organized – we were watching difficult surgeries and passed the complete course on modern surgical interventions. One may learn a lot with such professionals, as Mr. Botchorishvili, Mr Vitaliy Berejin and others.”

“Aversi Clinic” has organized the seminar at the highest level. The organization of similar conferences at the clinic has become a tradition.