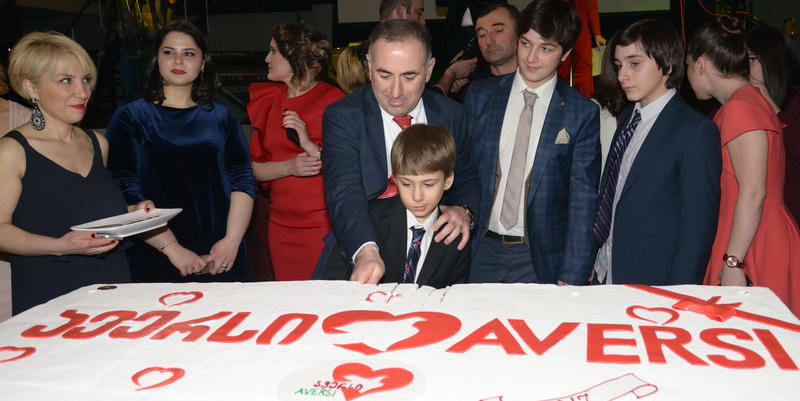 The employees of “Aversi” gathered for the fourth time in order to assess the past year, to reveal the best employees and to encourage them. The corporate party was held on the 21st of January, in the club-restaurant “Triumph”.

The founder of the company, Mr. Paata Kurtanidze wished a happy 2017 year to the employees of “Aversi”:

-We will have to work harder next year. I want to thank everyone who with their hard work and professionalism contributed to the success of the company and our country not only in 2016, but through the last 22 years. I hope 2017 is even more successful for your professional activities as well as for your private lives.

Another veteran employee of “Aversi”, one of the initiators of the idea of “Aversi”, Mr. Nikoloz Kurtanidze also wished a Happy New Year and Epiphany to the employees of “Aversi”:

-The first days of the New Year are very important for the human life. It’s the time for evaluation and re-evaluation, planning the new activities… It’s been years since “Aversi” in no longer a one family activity. Our work is a work of the whole country so our labor has become a very risky activity.

Employees of “Aversi”, Ia Akhalaia and Nikoloz Purtseladze hosted the party and they made the environment even more cozy and comfortable.

Traditionally, rewarding the best employees began with the pharmacists.  The winners of the first place were rewarded with a trip abroad, the winners of the second and third place – with money prizes.

Nino Tskifuri from “Trialeti” pharmacy, Ia Kvaratskhelia from “Bacho” and Nino arveladze from “Khetagurovi” (I, II, III places) were named as the most smiling pharmacists.

Lali Bolkvadze from “Gldani Mall”, Neno Maisuradze from “Vera” and Khatuna Bibilashvili from “Zedazen” were named as the most generous pharmacists.

Elza Fochkhua from “Fazisi”, Inga Mujiri from “Vake Park” and Tea Kapanadze from “Varketili” were named as the most professional pharmacists.

Irina Migineishvili from “Qartvelishvili”, Tatia Tskhvediani from “Eristavi” and Malkhaz Shatakishvili from “Phillips” were named as the best managers of the year.

“Clinic”, “Gldani Mall” and “Aramiants” were named as the best pharmacies.

After rewarding the pharmacy staff it was the turn for the employees of the Georgian pharmaceutical factory – “Aversi-Rational”.

Accounting department was named as the best department of “Aversi-Rational”.

And the final nominations were dedicated to “Aversi-Pharma”:

The marketing nominations were the following:

The third marketing group was named as the best groupof the year. Wife of the founder of “Aversi”, Nino Charkhalashvili named “Miss Aversi 2016”. This title was awarded to Tamar Aburjania.