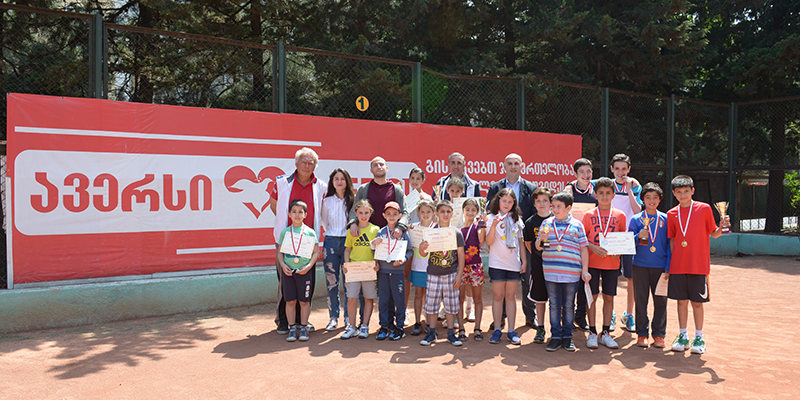 In June, “Aversi” hosted the tenth anniversary of its tennis tournament. Traditionally, 16 years old teens took part in the competition. Competition is held to distinguish winners in various age groups and also to celebrate their achievements. “Aversi” cup, together with the certificates for the first place were established by the pharmaceutical company to encourage the young sportsmen.

On June 5, at the Tbilisi “City-Sport” courts “Aversi Cup” award ceremony was held. This year, 100 children participated in the tournament. The best 10 were chosen in different age groups:

Oleg Bariushkin was the winner from the “Red Team”, where the participants were children from 5 to 8 years.

Nikoloz Gurgenidze took the first place in the “Orange Team”, where children from 8 to 9 years took part.

Natalie Tsomaia was the winner of the under 10 year olds category.

Among girls under 12 years the winner was Natalie Toklikishvili, among boys – Giorgi Tetradze.

Female winner from the under 14 year olds category was Lizi Dolidze, male winner was – Nika Bidzinashvili.

The winners of the under 16 year olds category were Nino Bibiashvili and Luka Koridze.

We spoke to the director of “City Sport”, Mikheil Butkhuzi about the importance of the tournament and its organizational aspects:

- We hosted the tenth “Aversi Cup” spring tournament. The tournament traditionally took place at the “City Sport” courts. The tournament is enormously popular and the number of participants grows every year.  60 children took part in the first tournament, while 150 children participated in different age categories last year. This year, the tournament hosted 100 young athletes.

We had a novelty this year – for those interested in the tournament we provided online information about the schedule and results of the competition and also online registration was available. We are planning to show the final matches online in the future. “Aversi Cup” became an honorable award among the young tennis players. Company continues to support sport activities and competitions in order to establish healthy lifestyle and to provide a healthy environment for the future generation.

We spoke to the General Director of “Aversi Pharma”, Irakli Purtseladze:

- We are pleased that "Aversi" tennis tournament is becoming more popular from year to year and the number of applicants is increasing. „Aversi” tennis tournament is an important event, especially for younger children. These are their first steps in big sports and it’s possible that some of them honor Georgia in the bigger arena in the future…Then, they will surely remember, that their first steps and first win took place in this very tournament…

It’s worth mentioning, that Mr. Irakli’s son, Saba Purtseladze has become the owner of “Aversi Cup” for many times and this year he already took part in the national tournament. "Aversi" tournament has paved him the way to the international arena. We wish the young athlete luck and success. “Aversi” is trying to introduce a healthy lifestyle and therefore, always promotes sports activities and organizes similar events. Tennis tournament is a part of this policy. The company will surely continue organizing such tournaments in the future.