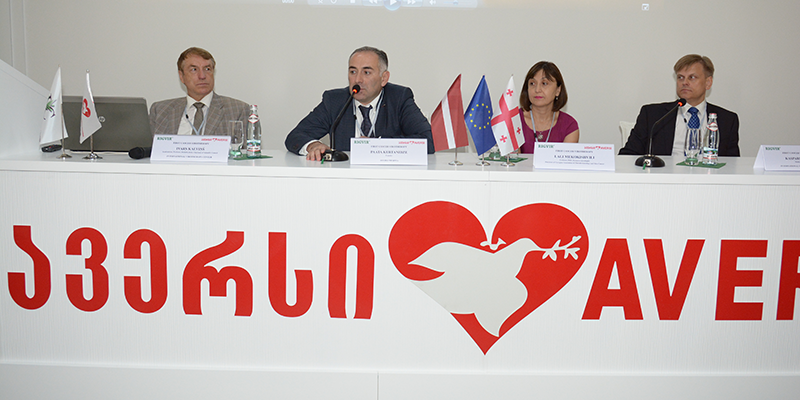 At the press conference held on the 30th of June the representatives of the International Virotherapy Center and “Aversi” discussed the clinical effectiveness and safety of “Rigvir”.

Virotherapy is a new and effective method to treat cancer that uses oncotropic and oncolytic viruses with the ability to find and destroy malignant cells in the body.

As the founder of “Aversi” Paata Kurtanidze pointed out, “Rigvir” safety and clinical effectiveness has been proven with several thousands of patients:

-“The first research in virotherapy began in 1960s when Latvian scientists under the guidance of Aina Muceniece examined the ability of viruses to identify and destroy malignant cells. After all the necessary evidence was collected, “Rigvir” was registered in Latvia in 2004. There are certain requirements for the transportation and storage of the medicine. “Rigvir” will therefore be available in the network of “Aversi” pharmacies, mainly at the branch located on D. Aghmashenebeli ave. 148. The use of “Rigvir” is possible in ambulatory conditions; however, under strict monitoring of oncologists and immunologists, following definite guidelines of the medicine usage.  There will be held seminars at the branches of “Aversi Clinic” with the aim of presenting detailed information about virotherapy to oncologists.

“Rigvir” has many advantages, mainly: safety, effectiveness, well tolerated and absence of side-effects. Certain side-effects are caused as a result of already recognized methods of treatment. “Rigvir” is the first not genetically modified virus in the world. It improves the quality of life and may be applied in the intervals between the radiation and chemotherapy. Besides, “Rigvir” is a viral immunomodulator with antitumour effect. I hope this medicine will become the opportunity of recovery for a lot of patients.”

The special guest of the press-conference was the academician Ivars Kalvins, one of the three winners of the European Inventors Awards 2015:

- “Rigvir” is the first medicine in the world representing virotherapy.  It is s viral immunomodulator with antitumour effect.  “Rigvir” has been registered and introduced into the clinical practice of oncologists.

“Rigvir” contains live, natural virus, tumoraffin and oncolytic, non-pathogenic, genetically unmodified. “Rigvir” does not contain antibiotics, stimulants, and other potentially toxic substances. It is well tolerated and does not cause serious side effects; can induce temporary side-effects (temperature around 37°C for 1-3 days, fatigue). “Rigvir” is indicated for cancer treatment, prevention of its recurrences, metastases, and secondary immune deficiency. It also functions as an immunomodulator by activating the immune cells.

Since the time the medicine was registered no information about any serious side effects has been received.

As any other medicine, “Rigvir” may cause certain side effects; however, not in all patients. The side effects caused by “Rigvir” are short-term and do not require special therapy.”

The representative of the program “Euromelanoma” in Georgia Lali Mekokishvili shared with us her opinion:

-“Melanoma is one of the most dangerous and rapidly growing tumors. During the last decade the incidence of this disease has increased by 67%. In comparison with other tumor types, the data is quite impressive. In accordance with the official data of Georgia, in a year 2 melanoma cases are detected in 100 thousand patients; however, up to now there has not been conducted accurate collection of data and that’s why the real figures may be even more frightening.

There are many risk factors in Georgia that may cause cancer: solariums have become particularly popular with a lot of citizens. This fact proves one of the increased risks of developing melanoma. In some cases even imperceptible skin melanoma has the ability to spread metastases. In the case of metastases, the probability of patient rescue reduces to 10 %. The detection of the disease at the early stage is quite difficult and besides, in this case, chemotherapy does not provide expected results. In terms of mortality, melanoma is the most malignant tumor.

In Australia and European countries the probability of detecting melanoma at an early stage has significantly increased. Unfortunately, in Georgia melanoma is detected at an advanced stage. In accordance with the statistical data, 50-60% of melanoma cases are detected at the stages III and IV. In such case, any new method giving the possibility to treat metastatic melanoma and consequently extend life, is of great interest for us and is worth paying proper attention. “Rigvir”, as the medicine that does not cause any side effects, will give us the opportunity to extend life of our patients.”

The medical director of the International Virotherapy Center Kaspars Losans has also visited Georgia.  As he pointed out at the conference, the seminars that will be organized by “Aversi” will significantly contribute to better awareness of our oncologists about the new method to treat oncological diseases:

-“We are here to share our knowledge and experience with you. Our center and mainly “Rigvir” assists people in recovery and extension of life. “

“Aversi” is the official, exclusive distributor of Rigvir in Georgia. The medicine is to return hope for recovery to many patients.

“Aversi”-wish you health and peace of mind!