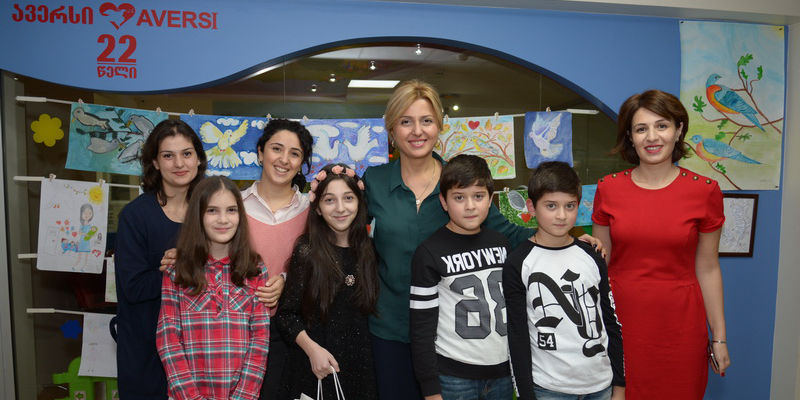 Another successful year passed for “Aversi”. On the 14th of November the company celebrated its 22nd birthday with several interesting activities: every customer who visited “Aversi” pharmacies on that day got 22% discount on medicines, while every 22nd customer received “Aversi” 20-Gel gift cards. At the end of the day employees of the company gathered in “Aversi-Clinic” for blood donation.

-It’s been a long time since the employees of “Aversi” have been participating in the activity “Donate Blood, Save a Life”. Under the frames of this activity we donate blood to the medical facility and try to help those people, who are in need of blood. There is nothing to brag about, helping those in need is the duty of each of us.

Head of the marketing team of “Aversi”, Eka Iashvili donated blood for the fifth time:

-Blood donation is a voluntary activity to help people whose life are in danger. Saving even one single life is very important. Today “Aversi” is celebrating its birthday and I think it’s symbolic that the chose this activity as the celebration, because this action perfectly represents the main goal of “Aversi”- caring about the health and peace of mind of the people.

Another interesting event took place in “Aversi-Clinic” on the 14th of November.

On the 7th of November “Aversi” announced children’s painting contest. 150 children under the age of 12 took part in the contest. Their task was to paint “Aversi” logo – a dove.

Head of the public relations department, Lali Bregvadze admitted that she didn’t expect such active participation. Two winners had to be named under the terms of the competition: one by the facebook users and other chosen by “Aversi”. But “Aversi” received so many amazing drawings that it became very hard to choose only two winners, as a result, four contestants were awarded.

David Khubuluri became the chosen one of “Aversi”.

-I drew a dove and a heart and in the heart I drew Georgia, to express my love towards my hometown. Georgia is in the heart of every citizen. That’s the idea that helped me win the contest – noted David. Facebook users chose Anuki Esartia from Zugdidi. She and David were awarded with Ipad and “Bebble” production.

Little painters tasted the cake decorated with their own paintings.

We planned several events for the celebration of “Aversi” anniversary – noted Lali Bregvadze – for me, most important of them was the blood donation. It’s been nearly two years since the British physician James Blandel transfused blood for the first time. The procedure ended positively which was an accident because by that time nobody knew that each person needs certain type of blood to be transfused. Nowadays blood donation is considered as a simple but also very important procedure and it’s a pleasure to me that our donated blood can help save at least one single life.