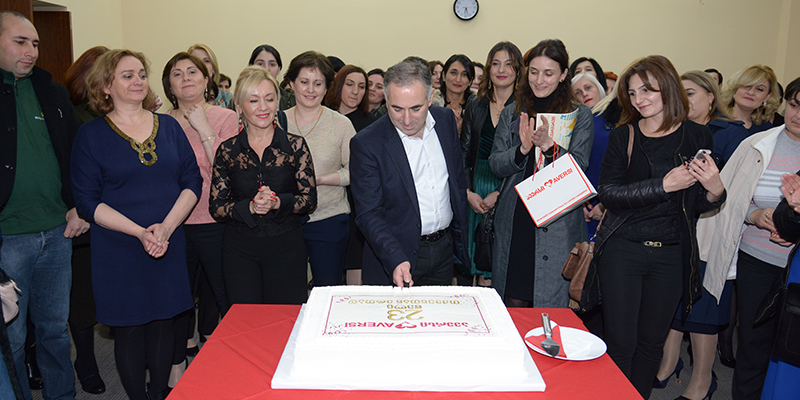 "Aversi” revealed the most successful and lucky pharmacists

The most successful pharmacists of Tbilisi and regions, also the founders of “Aversi” and the business partners and celebrities were among the guests of the delightful evening. Music band “Prime Show” performed at the evening hosted by Nika Nakaia.

- We decided to celebrate the 23rd birthday of “Aversi” with this encouraging competition for the employees. Our company registered on the 14th of November, 23 years ago. At that moment I did not think that it would reach such a scale. More than 9,000 people are employed in "Aversi" today and it is one of the largest private companies in Georgia – noted the founder of the company, Paata Kurtanidze. He wished a lot more success to the employees of the company and also thanked them for the loyalty and devoted work. According to him, pharmacists are the main reason for the love and trust “Aversi” has from the people:

- My main goal is that every employee of “Aversi” feels content about the working conditions and with the company’s policy, because an employee can’t do his/her job properly if he/she isn’t satisfied with the working conditions. We hope that such surprises will increase motivation of the employees. We established a great tradition 15 years ago – at every New Year’s corporate party we award the pharmacists who had the best results through the year with special prices. The tradition continues and today the luckiest pharmacists will get cash prizes as well as a lot of other gifts, including travelling abroad.

The idea of the lottery came from the head of the pharmacy department of “Aversi” Mr. Gia Chigogidze:

- The company awards the best pharmacies every month but this time we changed the idea in connection with the birthday of the company, so we announced a nine-month motivation contest.

We selected a special prize for the best pharmacist, we also revealed 10 best pharmacists of spring, 10 from summer and 10 of the best from autumn and awarded them with bonus of 300 Gel. The most successful pharmacists were awarded with the lottery tickets.

We talked to the head of the regional pharmaceutical chain of “Aversi” – Eka Burdzenidze:

- All pharmacists took part in the motivational competition. There are 126 "Aversi" pharmacies in the regions, from which we selected 454 employees. 50 from the winners were the managers and the other winners are pharmacists. They received the tickets of the lottery draw. The number of the tickets was determined by different criteria: sales goals, profit, generosity…

Those who were not able to attend today's event were able to watch the lottery draw at the Facebook page of “Aversi”.  The competition caused great interest, so it will be held next year as well.

Lali Gugunashvili is an employee of "Uno":

- I received a wonderful gift from "Aversi" - I will travel to Europe. I’m pleased to know that the company I work for appreciates the effort of the employees. This was a beautiful evening. I want to say thanks to the founder and management of the company.

- I work in "Zedazeni". I'm so full of emotions, I can’t find words. Thanks to Mr. Paata and Mr. Gia for giving us such beautiful days.

Representative of Parapharm, Shorena Tabatadze became the owner of 5000 Gel:

- I have been working in "Aversi" for several months and I am so happy today. I would like to express my gratitude to Mr. Patara not only for today's surprise, but for the kindness he spreads to the whole Georgia.

The list of the best pharmacists of the regions that will travel abroad on creative business trip:

Maia Maisuradze is the employee of Gori's fourth pharmacy:

-  It’s my seventh year in “Aversi” and all this time I’ve been feeling a great support from the company. “Aversi” constantly cares about the wellbeing of the people employed in the company. If you work diligently, your efforts will be appreciated here.

Mariam Lomsadze was also unable to hide her emotions. Together with 19 colleagues she’s getting ready for the trip to Europe.

Elizabetha Gigineishvili from Samtredia pharmacy didn’t attend the event but she became the winner of 5000 Gel.

The contest turned out to be so high rated that it will definitely continue and become another pleasant tradition of the company.

The students of the British-Georgian Academy visited "Aversi-Rational"